First off, show of hands … who has the song “Step by Step” by NKTOB in their head because of this post title?

Even if you didn’t, I betcha do now.

Since posting about Mason’s Disney Cars birthday party, I’ve had a couple of emails asking for more details on the cake I decorated. 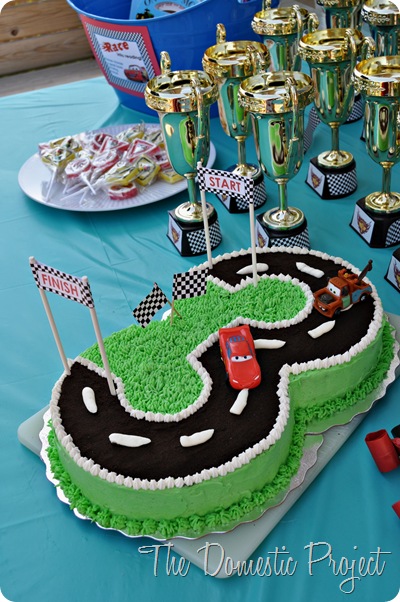 Like I said in my last post, I’d already decided to do a write-up about that so you’re in luck! I took pictures and everything, y’all! Now lets all pretend this is one of those incredibly impressive DIY blogs instead of a minorly-popular humour thingy, and jump in to the how-to’s. And I promise you, its super easy. Seriously! I also apologize in advance for the initial lack of photos … I didn’t think about doing a tutorial on this until I was about to start cutting the cakes into each other. Ok, here we go …

If it isn’t immediately obvious, your first step is to bake a cake. Two, actually. I used Love & Olive Oil’s Chocolate Stout Cake recipe which gave me enough for exactly two 9 inch round cakes, but you can really use whatever you’d like, and whatever sized round pans you prefer (just make sure your recipe accommodates for larger or smaller sizes!). I like the stout cake because its chocolaty and quite dense (almost brownie-like), which makes it nice and sturdy for decorating.

Once you’ve baked your two round cakes and they’ve cooled, try your best to level the rounded part at the top a bit with a knife and then flip them over so the bottom is now the top. Nice and smooth, huh? Get down on eye level and make sure the two cakes are fairly close to the same height, because you’re about to put these suckers together and don’t want a weird hill marring your decorating-goddess-like skillz. Word! Oh, and I should add that I didn’t do a filling in the middle for these cakes as, to be honest, it was only for a bunch of kids. And I was already booting for them with the Guinness beer in the cake, so they shouldn’t have been complaining.

Now that the cakes are levelled, you need to cut a small section out of one of them so they nestle into each other like two puzzle pieces. I used the bottom of the cake pan as a template, and just cut a little ways into the cake to make a small semicircle. 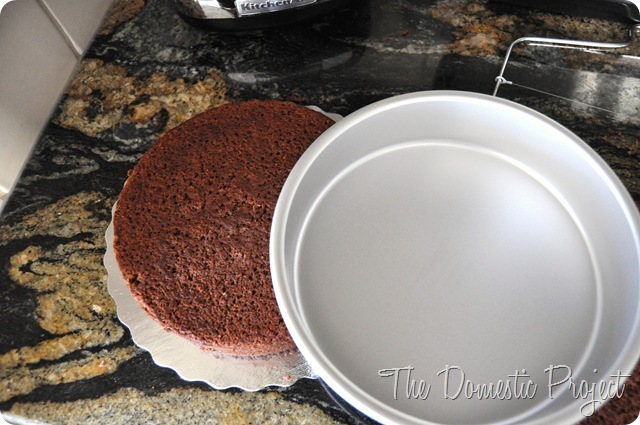 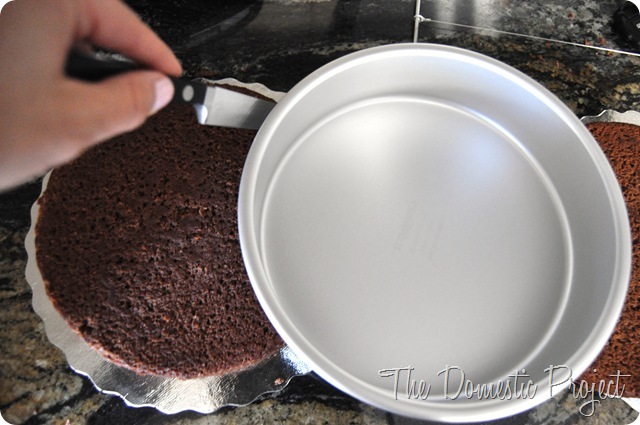 And now they should fit snuggly into each other. Like so: 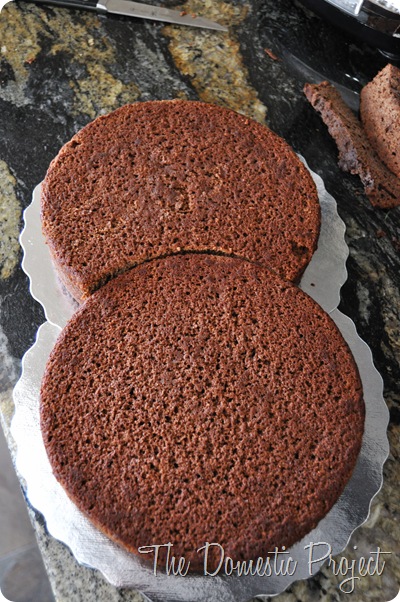 At this point you want to make your choice of icing for the cakes. I went with Love & Olive Oil’s Vanilla Bean Buttercream because it’s yummers, and just added some extra icing sugar until I had a slightly stiffer consistency. The recipe as written made more than enough to decorate my two 9 inch rounds, btw. Again, you can use whatever recipe you’d like but just keep in mind that you want to be able to tint it a green colour so a paler icing (as opposed to a chocolate) is preferable.  Now slap a tiny bit of whatever icing you make between the two cakes to stick ‘em together, and lets move on.

Remove about 1 – 1.5 cups of icing (I’m just guessing here) and set it aside because its going to be the white. Using food colouring (I prefer Wilton’s gel colours), tint the remaining green and get ready to crumb coat!

Crumb coating a cake is simply putting a thin layer of icing all over it, and sticking it in the fridge for 15 minutes. What this does is slightly harden the icing, trapping all those nasty crumbs so they don’t mess up your actual decorating layer. Neat, hey? Don’t worry about it being perfect, or if bits of the cake are showing through. You’re going to put more icing on top later so it doesn’t really matter! Here’s what my cake looked like before I popped it in the fridge for 15 minutes: 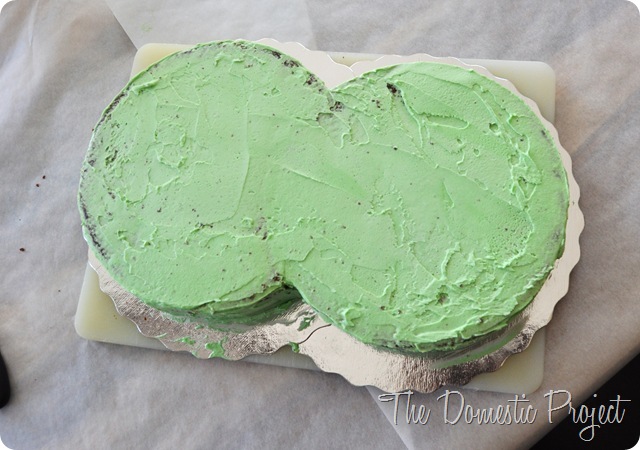 Crumb coating done and cake is out of the fridge? Great! Now take more of your icing, and put your actual green decorating layer down on the tops and sides. One thing I wish I’d done was put a decently-heavy layer of icing on the section of the cake that would have the “3” on it (which we’ll do later in cookie crumbs), because once we cut the cake the people who got pieces of the road got kindof a bum deal, with very little icing to enjoy and mostly just dry cookie. If that makes sense. You do want to try and make the sides of the cake decently smooth at this point, but don’t knock yourself out for the top … we’ll be covering that up with even more icing later on.

Now the “3”. I know this part looks complicated or like I used a template or maybe even that I'm some kindof Number 3-making savant but ... nope. Just cups and old I.D cards! Eyeball the placement, and lightly press them down. 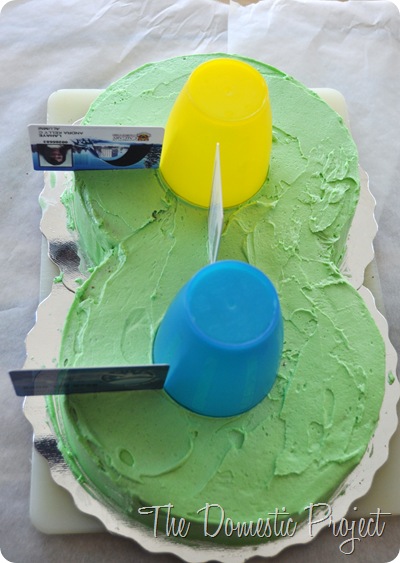 That’s my old university I.D. masquerading as the top of the Number 3, btw. Ah, to be young and innocent once more ...

Now carefully add a small amount of cookie crumbs onto the cake, placing them as close to the cups and I.D. cards as possible in small piles. I used a spoon to scoop them into place. 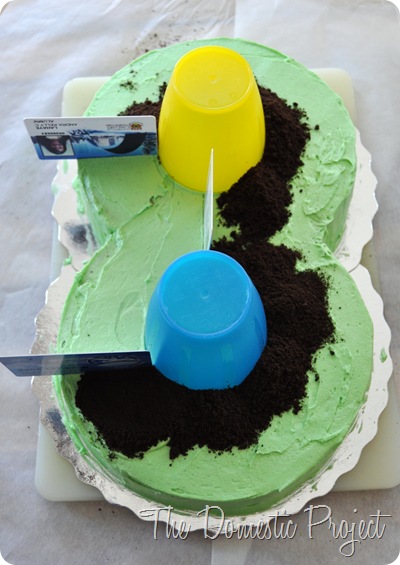 Also keep in mind that you do not actually need too many cookie crumbs for this part … maybe 2 cups? Don’t do what I did, which was go crazy at Bulk Barn and purchase enough cookie crumbs to cover the entire top of my kitchen table: 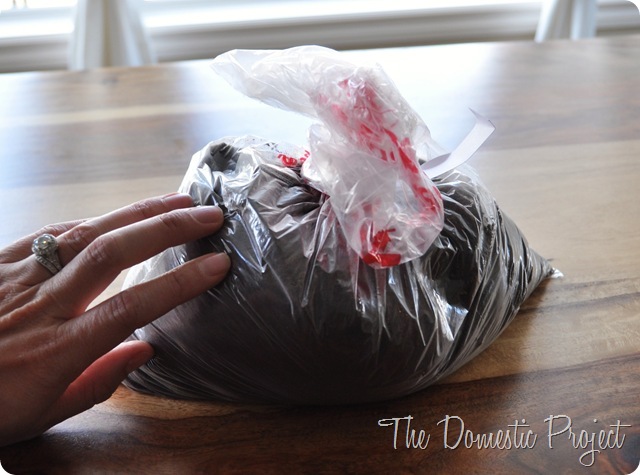 Those are my leftover crumbs.

Anyways, once your crumbs are in place you can begin gently patting and smoothing them down onto the cake. I tried to keep the edges slightly clear of crumbs because I knew I’d be putting more icing there later. 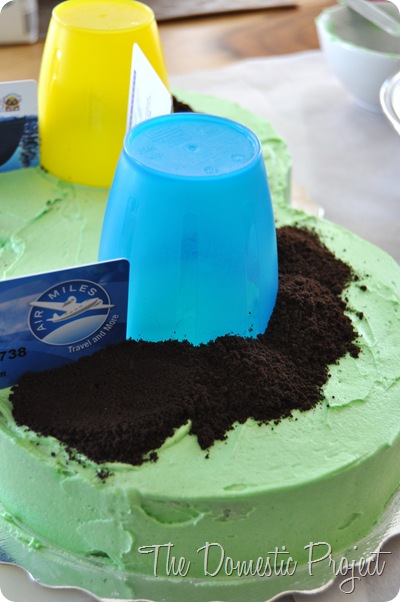 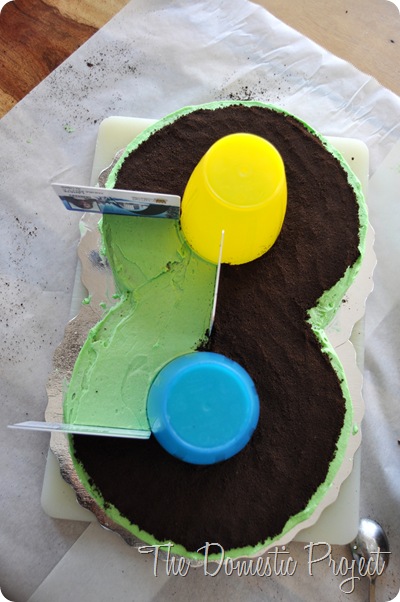 You’ll notice that I had a few wayward crumbs near the middle of my “3” but again, I didn’t stress too much because they were about to be covered up with more icing.

Now carefully remove the cups and I.D. cards and voila! You’re left with a slightly-ragged looking Number 3! You can now fill an icing bag with the remaining green icing and start piping it onto the cake with whichever tip you’d prefer. I used a grass tip for the, you guessed it, grass (Wilton #233). 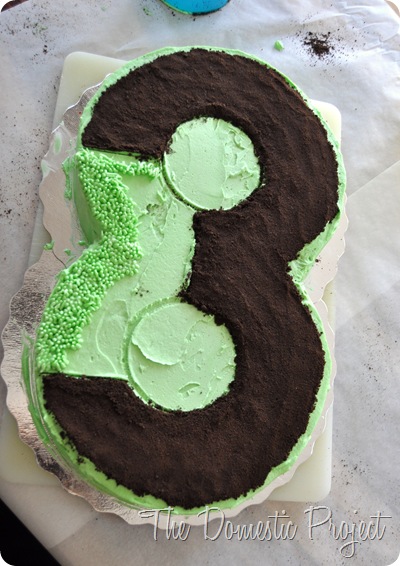 Because I used a pure buttercream (all butter, no shortening), my icing had a tendency to start looking melted after about 5 minutes of work due to the heat of my hands warming the bag. If this happens to you, just pop the bag into the fridge for 2-3 minutes and then get back at ‘er! Since you also need to outline the “3” with the white icing you set aside, you could actually alternate between the bag of green icing and the bag of white icing, chilling one in the fridge while you do a bit of piping with the other. With that being said, I used a star tip to outline the “3” in white (a Wilton #18). 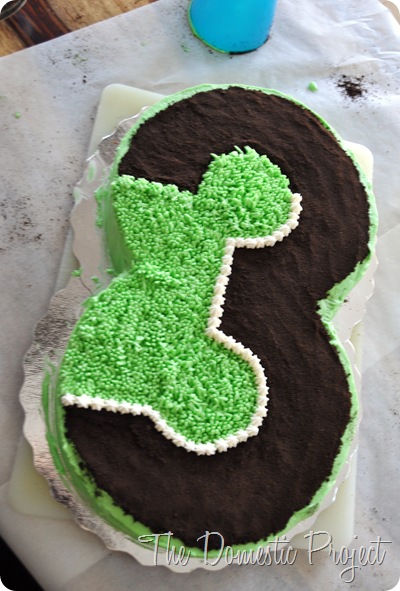 Try to keep the bulk of the white icing touching other icing as opposed to the cookie crumb road. If you don’t, you’ll find that the icing often lifts up when you’re trying to pull the bag away as it just takes the cookie crumbs with it (which is why I tried to keep a bit of an icing border around the outside of the “3” when I was patting the cookie crumbs down).

Pipe a little grass around the bottom, and you’re almost done! 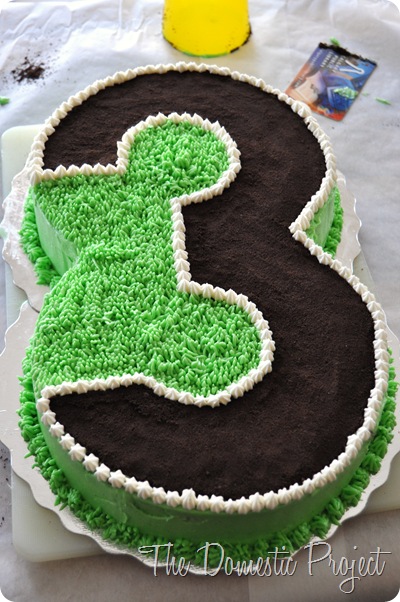 For the lines on the road I used the remaining white icing with a plain circle tip (Wilton #12). Would I do that again? No. I really struggled with getting the icing to adhere to the cookie crumbs without lifting up as I pulled the bag away, and it made for some slightly-awkward looking lines (a couple may-or-may-not resemble male genitalia). Next time I’d look for some sort of white or yellow candy that I could press in there instead … it would’ve been so.much.easier.

Once you’re done the lines,place your cars and you’re good to go! 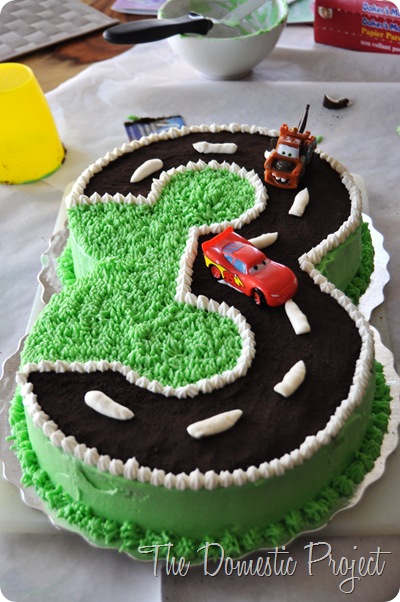 I did the decorating the day before the party, and the day of I added two small checkered flags to the middle (purchased from Oriental Trading Company), as well as two homemade Start and Finish signs. 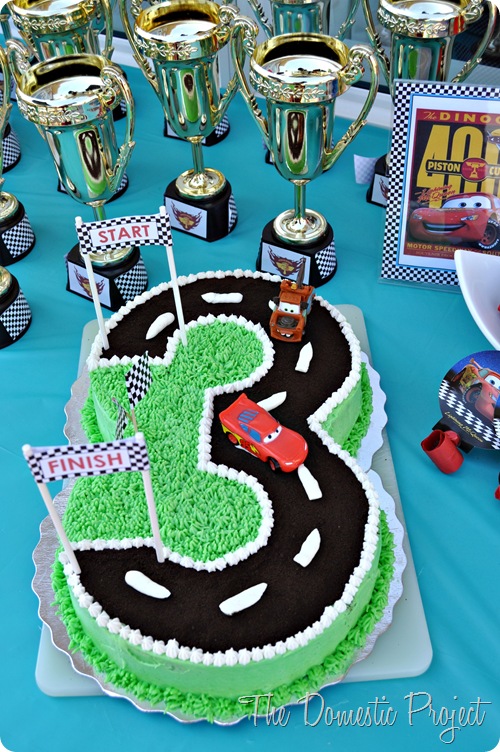 See? Tedious, but not so hard right? And now I send you on your way, you gorgeous little cake-decorating-mama you! Good luck, and if anyone actually uses this tutorial I’d love to see pictures of the finished product!